This was a major archetype in 2010. The goal was to start with Sableye SF, allowing you to go first, and then use Impersonate to quickly fill your hand with Magikarp (via Pokémon Collector) and discard them (generally via Felicity’s Drawing) to power up Gyarados’s Tail Revenge. Once three Magikarp are in the discard pile, Gyarados hits for 90 damage for zero Energy, which is huge. Expert Belt and Crobat G boost your damage output to facilitate OHKOs, Super Scoop Up denies KOs (Gyarados’s 130 HP is very bulky), and Cyclone Energy and Regice LA force the Defending Pokémon to the Bench, often allowing you to steal a couple easy Prizes per game.

I’ll kick this off with my own personal list.

I’d wager that this list is fairly standard. A lot of people favored just three Gyarados, but I really like the fourth. It helps you draw into it earlier and it allows you to recover more easily after your Gyarados is KO’d. Azelf MT is very nice against SP decks, its Poké-Body requiring your opponent to pay an extra Colorless Energy to use their Basic Pokémon’s attacks. Since Uxie LA and Mesprit LA are already valuable Pokémon to Bench, the Azelf is a very natural inclusion that quite often autowins against SP decks not running Dialga G LV.X.

Three VS Seeker is a bit unconventional, but I love it. The heavy count allows me to abuse Felicity’s Drawing and lets me frequently respond to a KO with Cynthia’s Feelings. My sixty-first card in this list would likely be a Judge, which can steal games. Getting a quick Gyarados powered up and then using Impersonate for a Judge can overrun opponents and VS Seeker allows me to reuse it as needed.

An account of his Nationals run with this deck can be found here. It’s a worthwhile read. 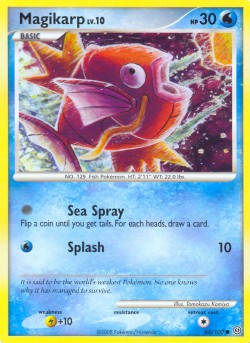 Nationals was awesome! I wasn’t too sure if I’d be able to make it until only a week or two before the event, but I am really glad I went. I met a lot of cool people and had a great time. Thanks to everyone who said hi to me; it was so nice to …

Mychael Bryan played this list in the Senior Division at Worlds 2010, placing second.

The Luxray GL LV.X tech saw some play in the deck. I personally don’t care for it at all, but it’s hard to argue with results. Playing Mesprit MT instead of Mesprit LA was a misplay and I’ve heard that that choice ended up costing him the Finals.

I talked to Mike Diaz at a league challenge. He won US nats in 2010 in Seniors using Luxchomp and used it in worlds. Apparently, the reason Gyarados decks run Azelf MT is because it is torture for luxchomp to have to attack for their original costs if they have power gain and 3-4 energy if they don’t. That’s why Michael Diaz lost to Michael Bryan.