The best way to ultimately describe luxchomp was its ability to take fast ko’s turn after turn and setup turn after turn as well with it’s 3 energy dragon rush attack and the fact that it was a lv.X card with others like e.gain to reduce the attack cost of SP pkmn by 1 and Double colourless energy with counts for 2 energy made it extremely possible. there are also other cards such as Uxie LA to draw new hands by placing it on the bench so you can use your supporters for searching out cards like E.gain for dragon rush. There is also a ton of other options the deck allows but it’s emphasis is for a faster attack rate

There is a large amount of ways to playing this deck, this is just a simplified decklist, Jay Hornung article “Bright Looks and Psychic Locks” – An In-Depth Look at the 2010 DP-UL Format showed his tournament winning deck list from 2010 as well as detailed pointers to it’s success. As well as I’m sure that there are other players willing and eager to show there approach to luxchomp, I hope that mine is enticing enough for now.

Looks pretty solid to me. However, 4 Power Spray seems like a little too much considering you play no call energy and only 2 Rosanne’s Research. I’d consider a couple of Pokemon Collector either way. And probably a Premier Ball over one of your search cards. I’m not completely sold on judge either but I think it could be interesting.

It is nearly exact to Yuta Komatdu (I’m sorry if I messed up your name) because I literally could not find really anything to change. Maybe a switch, drifblim fb, or snow point temple. Anyways, strategy is to win before your opponent can even set up. That is possible through cards like Luxray GL lv.X that can basically catcher effect up anything using his Poke-Power Bright Look and bring up a heavy retreated or worthless attacker, and then snipe off all of your opponent’s weak Basic Pokemon by the means of Garchomp C lv.X’s attack, Dragon Rush. Dialga G lv.X can also shut off Poke-Bodies, which helped against popular cards like Spiritomb and Vileplume. 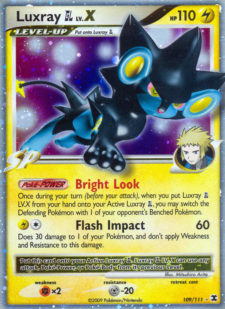 The Bible On Luxchomp

Surgeon General’s Warning: This is possibly the longest article you’ve ever read. If you have somewhere to be in the next half hour, you might not want to start reading. You might need to print the article out so that you can put a bookmark on the...

If memory serves, this is declassified. The lists aren’t necessarily gold standard, but if you didn’t play then, it’s the best starting point you’ll find.

I can’t seem to get the article to show up.

Yuta Komatsuda is the correct spelling

The Bible On Luxchomp

Surgeon General’s Warning: This is possibly the longest article you’ve ever read. If you have somewhere to be in the next half hour, you might not want to start reading. You might need to print the article out so that you can put a bookmark on the page you left off. If you’re hungry, you …

If memory serves, this is declassified. The lists aren’t necessarily gold standard, but if you didn’t play then, it’s the best starting point you’ll find.

Oh wow, Josh wrote it? With an author like that, how can you go wrong?

@Adam, any thoughts on the visibility issues?

Well, when I personally clicked on it it wouldn’t let me see it either. Then I noticed it said it was an underground article.

It is, but I also can’t view it, and even then there’s always a free preview. Furthermore, I’m 99% sure it’s one of the UG articles that’ve been made publicly available to see what UG is like.

Some of the older articles aren’t showing up because of a bad naming structure for the images included in them. At some point I want to go through all of them but I’m not sure when I’ll get to it.

That should be cleaned up now.

While Josh’s lists weren’t particularly regarded at the time of its publishing, the article is excellent for old decks because of the number of options it analyzes.