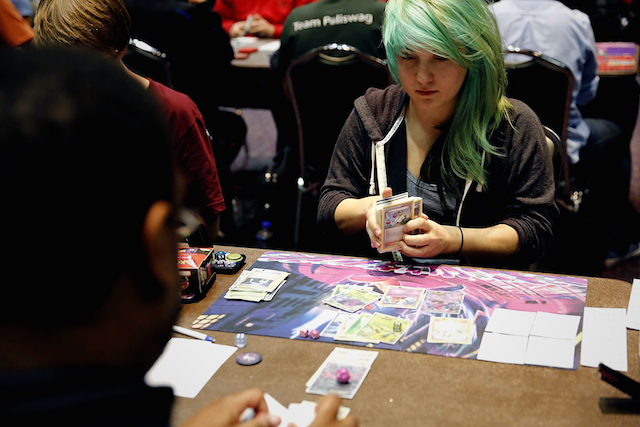 “It Ain’t Easy Being Green” – A Triple Tournament Report and Interviews with the...

Hello there SixPrizes community! My name is Nicholena Moon, and I’m very excited to share my first Underground article with you. Before I begin, I’ll tell you a little about myself for those of you who don’t already know me. I’m fairly new to the...

Just wanted to say thank you and that I enjoyed the article, as a female player, judge, Pokemom (of a daughter and sons). I had not heard of some of the players in the article before. I guess we will be paying more attention to them now. Since I was hanging out in the juniors room at Ft. Wayne, I will say I was happy to see a good turnout of girls. I think the seniors had quite a few, too, but I didn’t spend as much time in there. Congrats on making day 2!

Great article! I really enjoyed it!
As a female player myself, I feel like women are often underrepresented at Pokemon events. It’s great to see some girls seeing some top cut action though!
This year is my first year in Masters, and honestly I’m a bit nervous. Even though I qualified for Worlds last year, I really don’t have high expectations for myself (by the way, I totally agree with your statement that some girls often discredit their accomplishments). Do you have any advice about Masters and playing in a male-dominated sport? I’d love to chat with other competitive females out there.
Anyway, thanks for the fancy little article and good luck getting your invite!

Thank you guys! I’m glad you enjoyed it! Stay tuned for more articles from me in the future

As far as advice for playing in a male-dominated sport, I would say just don’t let them push you around! If you ever get a mean comment, call them out on it! Have confidence that you know what you’re doing and you’ll do well.

Having been part of a few different competitive gaming circles, Pokemon (In my area at least) is somewhat refreshing with its representation of female players (both in general and in the higher echelons as demonstrated by this article) even if in the bigger scheme of things they represent a significant minority.

Thank you very much for writing this article. It’s really important for female players of your (and those interviewed) calibur to be role models for those budding players looking to get better even if the statistics would see them discredit themselves.

I’ll hopefully get a chance to show this article to my girlfriend tonight, though I’m not sure she needs it since she stomped me at the last League Challenge